Anniversary of the Dedication of the Priory Church

On Wednesday 20 May, the Dominican community will celebrate the anniversary of the Dedication of the Priory Church. Fr Richard Finn, OP, who is writing a history of the province, tells us about the day of the consecration in 1929. 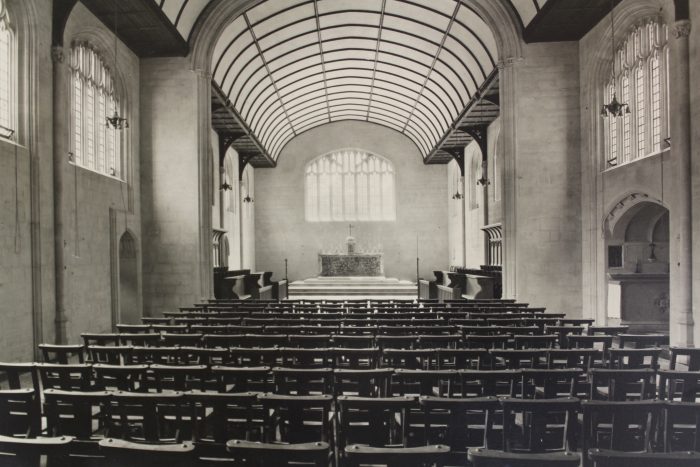 The Arrival of the New Community

On Friday May 17th 1929 a party of seventeen Dominican friars caught the Liverpool to London bus from the Armitage Gate of their priory at Hawkesyard in rural Staffordshire. It took the five priests, ten student brothers, and two lay brothers some twenty minutes to stow their luggage on top of the bus and climb aboard before it could pull away shortly after 1pm. They were heading for their new home at Blackfriars, Oxford, the church of which was to be consecrated on the Monday, some eight years after Cardinal Bourne had laid the foundation stone on August 15th 1921, and they were led by the new Prior of Oxford, Fr Bernard Delany. A little under four hours later, they were standing at the door of Blackfriars, which from the street presented a discreet classical frontage similar to that of an Oxford college, with no hint of the large monastic church to be entered under the archway. Designed by Edward Doran Webb F.S. A., the architect who had recently worked on the Birmingham Oratory, the monastic nature of the building was only revealed as the friars entered the priory to be greeted by the small community which had watched over the construction work, and by the Provincial, Fr Bede Jarrett, whose vision and fundraising had done so much to drive the project forward. After a gap of some four hundred years the Dominicans had formally returned to the university and city where their English mission had begun in 1221.

The next two days were largely given over to settling in and to preparations for the consecration on the Monday. At 9pm in the evening of Whit Sunday, the friars gathered in the classroom which served as their temporary chapel and sang matins and lauds of the martyrs – SS. Constantia & Jucunda – whose relics were to be enclosed in each of the altars of the church. On the day itself, the ceremony was led by the English Dominican, Bishop Felix Couturier of Alexandria, Ontario. Fr Jarrett consecrated the Holy Trinity altar; Fr Robert Bracey, Prior of Woodchester, consecrated the Lady altar; Fr Wulstan McCuskern, Prior of London, consecrated the St Dominic’s altar, and Fr Delany, the altar dedicated to St Thomas Aquinas. Their participation demonstrated the wider province’s commitment to the project, while its importance for the whole Order was demonstrated by the presence of Provincials from France, Ireland, and Belgium. 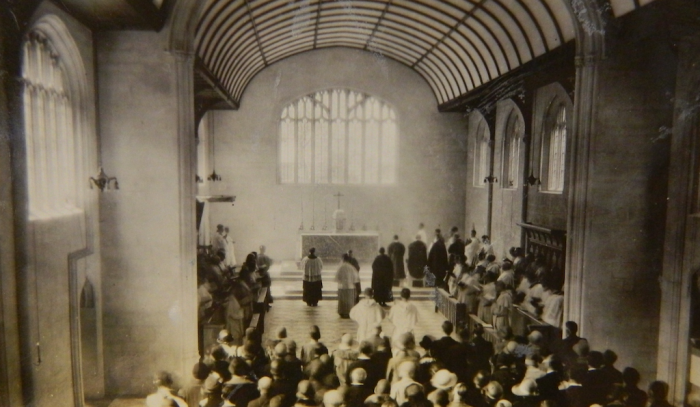 Nor did the consecration mark the end of the celebrations. On the following day, Tuesday May 21st, Bishop Couturier presided at a Solemn Pontifical Mass at which the Jesuit archbishop emeritus of Bombay, Alban Goodier, preached the sermon. After the morning liturgy, the ‘lady visitors were served with light refreshments in one of the lecture rooms’ which then lay outside the cloister, ‘while the clergy and lay men sat down to lunch in the refectory to the number of one hundred and twenty or more’ (Priory Chronicle). It was a joyous conclusion to mark what Abbot Butler in a contribution to a book for the centenary of Catholic Emancipation described as ‘the most important and characteristic’ Dominican work in England, ‘a church and priory…to be one of the great Dominican international Colleges’.